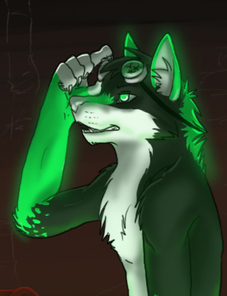 Name: "Toxic"
Species: Radioactive Wolf
Gender: Male
Form:   Anthro form (bipedal) or Anthropomorphic quadruped / feral
Design: Black main fur, white belly fur, fingers/toes and tail. Neon green arms, legs and
ears, as well as neon green nose bridge, ears and neck. His eyes are also neon
green as well as his tail tip. All of his green parts are glowing in the dark. His
nose is light grey. As an anthro, he is often seen wearing neon green welding goggles
with radioactive-symbols on them. He's also wearing a blue hawaii shirt with
radioactive-symbols on it.
Artwork by Wolftrail 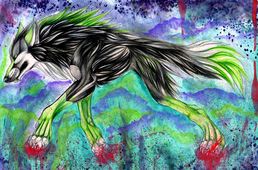 Toxic is a male radioactive wolf character I adopted in 2008.

This character was mainly adopted for a fursuit I planned to make. The idea never came to life though, as I quickly lost my motivation for working.

He's a cocky and laid back male. He loves the night, patries and glowing things. There are rumours that he is more than a simple party animal. Maybe you'll meet him in the club some night?
Artwork by Pulciosus

Please note that this character is © me and NOT free for use or for roleplay!